If you mess with after horny Bull, you might get more than just the horns. Be warned, I’ve seen it on YouTube. If the violent goring doesn’t kill you, the irrepressible raping will! What does this have to do with bodybuilding and supplements? NOTHING!! I was just in repulsive shock and so ghastly petrified at witnessing such a video, that I had to write about it! Don’t be randomly clicking on stuff when you’re bored, you might not like what you experience. Although, now that I think about it, the old aphorism of; “mess with a bull, and you get the horns”, could apply to bodybuilding and supplementation after all.

Now, bodybuilding doesn’t NEED to have the stigma of anabolics married to it. It just so happens that bodybuilding is an EXTREME undertaking and with an extremist attitude, comes the search for all the tools that would allow for maximum performance enhancement. It is only natural for any physique athlete to want to push the natural and physical boundaries. Therein lies the problem…or attraction! Depends on how you look at it! The point being, that when you take those radical approaches, you must be ready to suffer the consequences of your actions. With take, there must be a price…and that price for men, is usually a trade for your erection, or, growth of feminine, shapely, boobies. Supplementing with anabolics, or the current crop of powerful pro-hormones (1-DHEA, 4-DHEA, 19-Nor-DHEA), WILL lead to maximum performance in the gym and recovery and, ultimately, bigger and stronger muscles, but what are you willing to sacrifice? Let’s be truthful, not everyone experiences the dreaded “side-effects” of anabolic supplementation. Those dirty bastards are the few lucky ones, but for the rest of us, the post-cycle reaction may not be favorable. And some may be worse off than others!

In the 60’s and 70’s it seemed like our bodybuilding icons NEVER experienced the ugly side effects of the anabolic game. Could it have been that they didn’t indulge in as much usage? Could it have been that their “gear” was just that much better? Or perhaps, could it have been that they were just genetic freaks? It’s really tough to say, because even 1981 Mr. Olympia, Franco Columbu, took home a Sandow with a hooter hanging off his right pectoral! The thoughts on usage back then were simple; stay on and then taper off. Simple enough, right? And for the most part, it seemed to work! Eventually, however, good, old fashioned, side-effects manage to persevere, as was in the case of Franco. It’s my opinion that our silver age bodybuilding fathers were just plain LUCKY. We only ever heard about and saw the GREATS from that era, but what about the local bodybuilders that we never knew existed that were pounding Dbols and Primo?? My guess is that there were TONS of users experiencing estrogen bloat, gynecomastia, and plummeting sex drives, but we just never heard about all those poor fools.

Our fathers were kind of on to something with regards to the “tapering off anabolics” idea. In essence, it makes sense! Let the anabolics slowly leave the system, while at the same time, your own body recognizes the decline in exogenous hormone and correspondingly begins to prepare and produce its’ own natural hormone levels again. Sounds like a win/win right? Well, it will work for some and it won’t work as well for others. The anabolic pursuit is completely individual in response. What do we do about this dilemma? We attack post-cycle with a state of readiness (#RedCon1), and come prepared in case we face the hormonal backlash that we all but expected to endure. The best offense is a good defense, which surprisingly, I didn’t quite understand what my football coach was saying, until I compared it to anabolic use.

Given our current age in supplementation, we are at a brand new apex in over the counter effectiveness. In most cases of “Post Cycle Therapy” (PCT for short), we can now get away with effective supplements bought online! Sure, in some cases, pharmaceutical preparations will be necessary, but for the most part, Post Cycle Therapy can be handled via supplementation. Remember our silver age hero’s? By using the old “tapering” schema of anabolics/pro-hormones and then adding in estrogen management/aromatase inhibitor supplements when needed, for example RedCon1’s SHEILD, you have effectively placed your own body’s hormonal production factory in a much better place. If a stronger plan of preventative attack is needed, a more cohesive product with estrogen management with added pituitary stimulation, could be used, for example; RedCon1’s AFTERMATH. Like I stated previously, there will be extreme cases that will need pharmaceutical help post-cycle, but those are NOT majority cases, especially in the case of pro-hormone supplementation!

Let’s take a moment to get into WHY estrogen management is the key to post-cycle therapy for men. When coming off anabolic support, natural testosterone is extremely suppressed. Your anterior pituitary, in your brain, senses that the balance is off and sends a few hormones out (Luteinizing Hormone and Follicle Stimulating Hormone) to help stimulate the testicles to start producing more testosterone. The problem is, as testosterone is being produced, much of it is being aromatized into estrogen! And before a good ratio of testosterone to estrogen can be reached in the male body, there is a period in which estrogen becomes the dominant hormone. This is the main culprit as to WHY when coming off anabolics, side effects like muscle loss, fat gain, loss of sex drive, and potential gynecomastia becomes an issue! Control the estrogen repercussions, and you can recover like a champ! As a side note addition, if you control estrogen production the whole time WHILE using anabolic supplements and into the post-cycle phase, your body can recover much more optimally without experiencing the dreaded estrogen backlash! Take, for example, a 12 week cycle of SOMAL-4 and SOMAL-1 (4-DHEA and 1-DHEA). The SOMAL-4 will produce an estrogenic response via aromatization. If you used an aromatase inhibitor, such as SHEILD, WHILE on cycle the whole time, not only would you keep estrogen levels in check, you would make the most of your cycle while keeping side effects at a bare minimum. More importantly, however, because estrogen levels would have been in “normal range” the entire cycle, there is a good chance that natural testosterone production would NOT being drastically effected, and so recovery post-cycle would be optimal!

Ah, the beauty of hormonal manipulation. To quote Brian Fantana; “68% of the time, it works EVERYTIME.” I quote this because, number one, it’s hilarious, and number two, it is also somewhat relevant (kind of like our horny bull analogy). You are NOT smarter than your hormonal feedback loop. You simply cannot outthink your metabolic, hormonal, and biochemical pathways. However, what you can do is be prepared and have the right defense on your side! If you are going to play with the laws of nature and use powerful anabolic agents, or, powerful pro-hormones, such as SOMAL-1, SOMAL-4, or SOMAL-NOR (#RedCon1), then you should play a good defensive game and be ready to battle estrogen if you need to. SHEILD and AFTERMATH would be a great place to start. Be smart, use wisely, and be prepared, or make provisions for accepting a giant bull’s penis. Choose wisely, my friends. 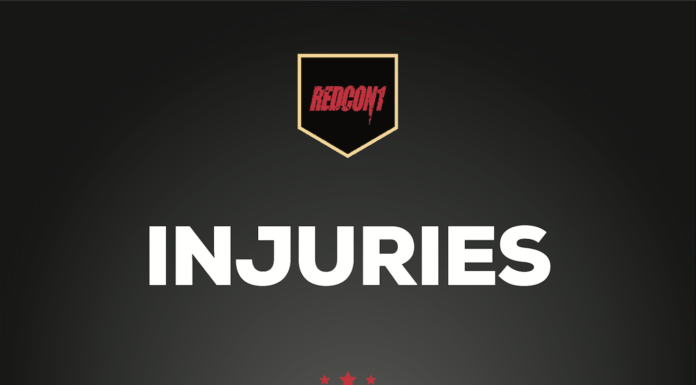 Redcon1 doubles the prize to $20,000 for its Summer Readiness Trials

Exercises You Don’t Do But You Should – Upper Chest Variation