What you need to know about RPG
By: IFBB Pro Brad “The Savage Nerd” Albertson

First let’s go over some biochemistry background information I feel needs to be understood before you can understand why RPG should be a staple in any growing mass monsters cycle.

The star of this show is none other than Insulin, this hormone can be your greatest friend or worst enemy while sculpting your flesh suit. The pancreas is 98% exocrine cells, which secrete pancreatic juice consisting of digestive enzymes, the other 2% is endocrine cells, which release the hormones insulin, glucagon, and somatostatin. Following carbohydrate ingestion, the blood glucose levels will rise as carbohydrates are digested and released into the blood stream, your pancreases will then release insulin to control this rise in blood glucose. Once the insulin is released it binds to receptors on the cell membranes and triggers a protein kinase cascade inside the cell. GLUT4 (a glucose transport protein) within the cell is activated and moves to the membrane and shuttles the glucose across the membrane. This glucose then undergoes a few conversions to become glycogen (Campbell, Farrell 721).

Insulin, simply put, stimulates glucose uptake into the tissues. Now it does not mean only muscle tissue, notice I stated tissues, this is because insulin also stimulates storage in the adipocytes as well, yeah that means fat storage. Therefore, it can be a useful tool when controlled properly or it can be your undoing when neglected.

Diabetes mellitus “is a group of serious chronic diseases characterized by abnormal glucose, fat, and protein metabolism” (Stevenson, Schiff 127). Type 2 diabetes is what we will focus on because the same ingredients used in RPG are used to remedy pre-diabetes and type 2 diabetes, this is where its effectiveness can be understood. “Beta cells of people with type 2 diabetes usually produce insulin, but the hormone’s target cells are insulin resistant” (Stevenson, Schiff 128). Acquiring this disease involves a host of elements, but one in particular is quite relevant to a nutritional regimen designed for muscle growth, this is the consumption of high amounts of carbohydrates over an extended period of time. When it comes to macronutrients, carbs are arguably the key to muscle gains. Carbohydrates along with fats are protein sparring macronutrients, this means as long as your carbohydrates and fats are sufficient enough to meet your daily energy needs it will prevent excessive catabolism of protein for energy, which means your protein will be better utilized for tissue repair (muscle repair and growth). The issue with this, and why RPG is an effective supplement is because eating high amounts of carbs frequently can reduce your insulin sensitivity, which is not what we want happening when trying to pack on as much lean muscle as possible, after all insulin is the most anabolic substance produced by the body and if it isn’t working properly you are missing out on valuable gains.

I personally researched every ingredient, specifically its relationship to glucose, in RPG and what do you know, all of them have positive studies linking them to improvements in glycemic control. Let’s knock this out shall we, in order of labeled, first on deck Chromium.

Gymnema Sylvestre: “The active compound of the plant is a group of acids termed as gymnemic acids. It has been observed that there could be a possible link between obesity, Gymnemic acids and diabetes” (Kanetkar, et al. 77). These acids have the ability to delay the glucose absorption in the blood. “When Gymnema leaf extract is administered to a diabetic patient, there is stimulation of the pancreas by virtue of which there is an increase in insulin release” (Kanetkar, et al. 78).

Bitter Melon: “M. charantia and its various extracts and components have been reported to exert hypoglycemic effects” (Joseph, Jini 93). This is one of the most popular antidiabetic plants used worldwide for a reason. “results clearly demonstrated that M. charantia and its extracts can directly regulate blood glucose via two mechanisms. Firstly, it can regulate how much glucose is absorbed by the gut into the blood following a meal and secondly, it can stimulate glucose uptake into skeletal muscle cells just like insulin. Moreover, it seems to exert its effect via the same intracellular signaling pathways as insulin in regulating glucose metabolism in the body” (Joseph, Jini 93).
Cinnamon: Cinnamon is already marketed as an antidiabetic remedy. “An improvement in glycemic control was seen in patients who received cinnamon as the sole therapy for diabetes, those with pre-diabetes and in those with high pre-treatment HbA1c” (Medagama 108). The studies reviewed not just provided evidence but some of these studies used the same dose of 500mg that is in RPG.

Berberine: In China in 1988 the hypoglycemic effect of berberine was reported and has many positive clinical reports. “Berberine significantly decreased HbA1c levels in diabetic patients. The effect of decreasing HbA1c was comparable to that of metformin a widely used oral hypoglycemic agent” (Yin, et al. 716).

Alpha-lipoic acid: Among many benefits associated with ALA or LA noticeable benefits associated with insulin and glucose disposal were evident. “In skeletal muscle, LA is proposed to recruit GLUT4 from its storage site in the Golgi to the sarcolemma, so that glucose uptake is stimulated by the local increase in transporter abundance” (Shay, et al. 1157). “The interaction of LA with regulatory components of the insulin signaling cascade has proved functionally beneficial to skeletal muscle glucose uptake, whole-body glucose tolerance, and helpful against insulin resistance. Improvements in glucose disposal were also observed in human patients with type 2 diabetes receiving LA” (Shay, et al. 1158).

Banaba: “The hypoglycemic affect of aqueous and methanol extracts have been demonstrated in several animal models as well as a number of human studies” (Miura, et al. 1). “Ten type 2 diabetic subjects were given 32mg or 48mg of the product daily for two weeks. A 30% decrease in blood glucose levels was reported after two weeks” (Miura, et al. 2). RPG contains 60mg per serving which is not just enough but more than was given for the positive results.

Paradoxine: Otherwise known as grains of paradise has multiple health benefits including being used for a treatment of diabetes. There is very limited human based studies on this herb but the animal studies showed “There was a significant decrease in blood glucose in male rats” (Ilic, et al. 352).

Biotin: “Biotin is known to play an essential role in metabolic pathways such as gluconeogenesis and fatty acid synthesis by acting as a prosthetic group for carboxylases” (Mitra, et al. 197). “Biotin exhibits principle effects on glucokinase expression in the liver and pancreas, glucokinase is a key enzyme in the glycolysis pathway which increases glucose catabolism and regulates blood glucose metabolism and plasma lipids concentrations” (Mitra, et al. 197).

Those are very brief snippets of the studies and scholarly academic journals researched by yours truly, there is plenty more information but below are my references if you want to check them out yourself. I hope this shed some light on the ingredients and why they are included in this phenomenal product. If RPG is not a staple in your growing regimen, are you really doing everything you can to grow? The answer is NO. For the Highest State of Readiness pick up your RPG now at www.redcon1.com, Use code “Brad10” at checkout for 10% off your order.

Medagama, Arjuna B. “The Glycaemic Outcomes of Cinnamon, a Review of the
Experimental Evidence and Clinical Trials.” Nutrition Journal, vol. 14, 16 Oct. 2015, pp. 1-12. EBSCOhost

Hypertrophy Back Training with Dallas McCarver and Joe Bennett 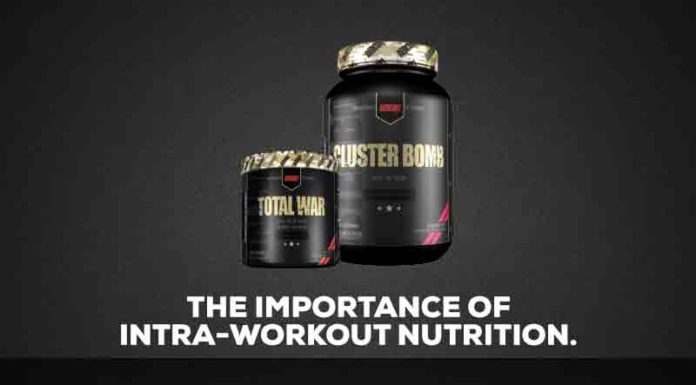 The Importance of Intra-workout Nutrition