L-Tyrosine is commonly found in the vast majority of supplements you consume on a daily basis. But the real question is, do you know why you’re consuming it? Do you know why its in this formula and what its benefits are? The aim of this article is to answer all of those questions and as always, ensure we are covering its mechanism of action and its ergogenic properties as these are the two main areas of concern for physique based athletes.

L-Tyrosine’s metabolic pathway actually begins with L-phenylalanine which then gets converted into L-tyrosine through phenylalanine hydroxylase (an enzyme.) It then gets converted into L-DOPA which is further decarboxylated into Dopamine. That then turns into noradrenaline before finally being converted to adrenaline. As you can assume given its catecholamine metabolic pathway, it will have significant impact on overall cognitive abilities, stress levels, and focus. Banderet et al looked at treating patients with tyrosine in an effort to reduce environmental stress as these acutely stressful situations can disrupt behavior, deplete brain norepinephrine, dopamine, and catecholaminergic neurotransmitters. This study used a double-blind, placebo-controlled crossover design utilizing 100 mg/kg of tyrosine after a 4.5 hour exposure to cold and hypoxia (again to see if supplementation would protect us from these stressful events.) What the researchers found was tyrosine significantly decreased symptoms, adverse moods, and performance impairments in subjects who exhibited average or greater responses to these environmental conditions. These results suggest that tyrosine should be evaluated in a variety of acutely stressful situations (1.) With that study showing us that tyrosine supplementation can aid in stressful environments, it should make more sense why its commonly found in our supplements. We as physique athletes are continuously running ourselves into the ground with resistance training and constant subjection to that type of stressful environment has the ability to lead to injury, over training, and/or unwanted central nervous system stress.

The next key point to touch on is tyrosine’s ability to help us as athletes from a cognitive functioning and performance standpoint. Neri and colleagues investigated the effects of tyrosine on cognitive performance during extended wakefulness. This particular study examine the effects of tyrosine during continuous nighttime work (which obviously involved sleep deprivation.) Subjects performed nine iterations of a battery of performance tasks and mood scales for approximately 13 h, beginning at 1930 and ending at 0820. They remained awake throughout the day on which the experiment began and were awake for more than 24 h by the end of testing. Six hours after the experiment began, one-half of the subjects received 150 mg.kg-1 tyrosine in a split dose while the other half received cornstarch placebo in a double-blind procedure. Tyrosine administration was associated with a significant amelioration of the usual performance decline on a psychomotor task and a significant reduction in lapse probability on a high-event- rate vigilance task. The improvements lasted on the order of 3 h. The results of this study also suggest that tyrosine is a relatively benign treatment at this dose. After further testing with other doses and timing of administration, tyrosine may prove useful in counteracting performance decrements during episodes of sustained work coupled with sleep loss (2.) With this information in mind, we need to remember context. If tyrosine has this ability to aid in counteracting cognitive performance decreases during sleep deprivation, does that also mean it will be even more effective when utilized when not sleep deprived? The answer is not as simple as just saying yes, but it is safe to say that with all of the other research from Hinz, Lenhert, Meeusen, Sved, etc on its ability to improve memory functioning, attention, and cognitive stress reduction, it certainly will be an aid (3, 4, 5, 6, 7, 8.)

In terms of practical application we’re looking at a dose of roughly 500mgs – 2g about 45 minutes before your resistance training (or even during periods of stress such as final examines, job interviews, presentations, etc.) Although that number is not set in stone, based on the literature available to us it is a good range to work within. As always start with the minimum effective dosage, takes notes on how it effects you personally, and adjust as needed. Hopefully you now have a better understanding of why tyrosine is in so many supplements. 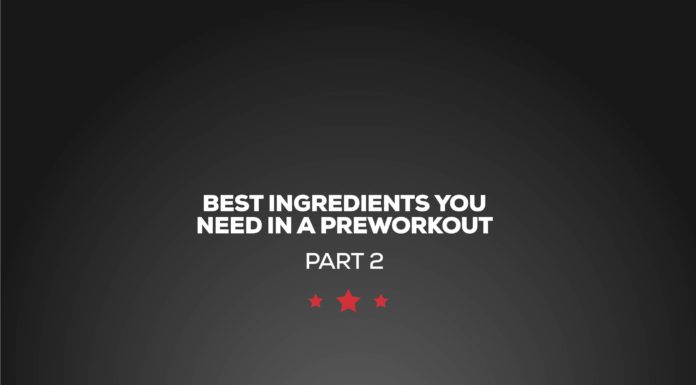 Best Ingredients to Look For in a Preworkout Part 2