I’ve written articles in the past for how important sleep is for your physique to develop. But now, I want to take things a step further and look specifically at how we can maximize our sleep to increase growth and development as a whole. This takes into consideration that fact that you’re getting a minimum of seven hours of sleep and will be utilizing the follow supplement ingredients to simply enhance an already optimal sleeping regimen. The ingredients we will be discussing are GABA, Taurine, and Mucuna Puriens.

First off, lets look into GABA! GABA is known as the ‘downer’ neurotransmitter that counters glutamate and has a tough time crossing the blood brain barrier. GABA is the main inhibitory neurotransmitter of the CNS. It is well established that activation of GABA(A) receptors favors sleep. Three generations of hypnotics are based on these GABA(A) receptor-mediated inhibitory processes. The first and second generation of hypnotics (barbiturates and benzodiazepines respectively) decrease waking, increase slow-wave sleep and enhance the intermediate stage situated between slow-wave sleep and paradoxical sleep, at the expense of this last sleep stage. The third generation of hypnotics (imidazopyridines and cyclopyrrolones) act similarly on waking and slow-wave sleep but the slight decrease of paradoxical sleep during the first hours does not result from an increase of the intermediate stage. It has been shown that GABA(B) receptor antagonists increase brain-activated behavioral states (waking and paradoxical sleep: dreaming stage). Recently, a specific GABA(C) receptor antagonist was synthesized and found by i.c.v. infusion to increase waking at the expense of slow-wave sleep and paradoxical sleep. Since the sensitivity of GABA(C) receptors for GABA is higher than that of GABA(A) and GABA(B) receptors, GABA(C) receptor agonists and antagonists, when available for clinical practice, could open up a new era for therapy of troubles such as insomnia, epilepsy and narcolepsy. They could possibly act at lower doses, with fewer side effects than currently used drugs (1.)

Second, we look into taurine. Taurine is an organic acid which acts as a lipid/membrane stablilizer in the body and is one of the major inhibitory amino acid neurotransmitters in the brain along with the previously mentioned GABA. When Taurine reaches the brain, it interacts with GABA receptors in the thalamus which is involved in controlling how much sensory information is forwarded to the processing cortex of the brain. Its in this way that taurine is more like a depressant than a stimulant and results in a suppression of excitatory activity. Lin et al stated in a paper entitled the “Effect of taurine and caffeine on sleep–wake activity in Drosophila melanogaster” that “Taurine is a GABA receptor agonist, which is inhibitory to neuronal firing. We show here that flies receiving a low dose of caffeine (0.01%) increase locomotor activity by 25%, and decrease total sleep by 15%. Treatment with taurine at 0.1% to 1.5% reduces locomotor activity by 28% to 86%, and shifts it from diurnal to nocturnal. At 0.75%, taurine also increases total sleep by 50%. Our results show that taurine increases sleep, while caffeine, as previously reported, attenuates sleep. Flies treated with both caffeine and taurine exhibit two differential effects which depend upon the ratio of taurine to caffeine. A high taurine:caffeine ratio promotes sleep, while a low ratio of taurine:caffeine inhibits sleep to a greater extent than the equivalent amount of caffeine alone” (2.)

Last, we look into Mucuna Puriens. Mucuna Pruriens are beans that are a good source of L-DOPA. One of the main reasons I’m a big fan of mucuna pruriens is because of their ability to induce a feeling of well being which aids in cortisol reductions and clearly is a good choice when looking at improving your quality of sleep. Shukla et al stated “This study included 60 subjects who were undergoing infertility screening and were found to be suffering from psychological stress, assessed on the basis of a questionnaire and elevated serum cortisol levels. Age-matched 60 healthy men having normal semen parameters and who had previously initiated at least one pregnancy were included as controls. Infertile subjects were administered with M. pruriens seed powder (5 g day(-1)) orally. For carrying out morphological and biochemical analysis, semen samples were collected twice, first before starting treatment and second after 3 months of treatment. The results demonstrated decreased sperm count and motility in subjects who were under psychological stress. Moreover, serum cortisol and seminal plasma lipid peroxide levels were also found elevated along with decreased seminal plasma glutathione (GSH) and ascorbic acid contents and reduced superoxide dismutase (SOD) and catalase activity. Treatment with M. pruriens significantly ameliorated psychological stress and seminal plasma lipid peroxide levels along with improved sperm count and motility. Treatment also restored the levels of SOD, catalase, GSH and ascorbic acid in seminal plasma of infertile men. On the basis of results of the present study, it may be concluded that M. pruriens not only reactivates the anti-oxidant defense system of infertile men but it also helps in the management of stress and improves semen quality” (3.)

There are obviously more tremendous sleep aids when it comes to supplementation but GABA, Taurine, and Mucuna Puriens are three that are easily in my top ten favorite sleep ingredients along with melatonin, l-theanine, and a few others. Luckily, GABA, Mucuna Puriens, melatonin, and l-theanine are all in RedCon1’s sleep product Fade Out which also contains other ingredients to aid in growth hormone support, getting you into a deeper REM sleep, as well as to improve muscle recovery!

Dallas Journey to the Olympia – Day 26 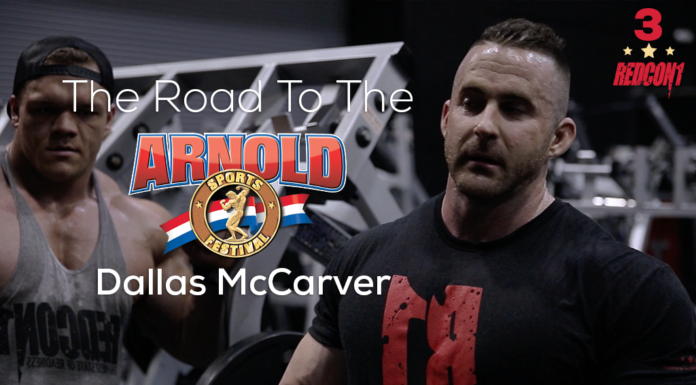