Now that it is well established that ALA has potential glucose management benefits, we can look further into its other potential benefits such as its ability to reduce negative oxidation. McNeilly et al looked at the effect of α-lipoic acid and exercise training on cardiovascular disease risk in obesity with impaired glucose tolerance. The abstract reads as follows “Obese subjects with impaired glucose tolerance (IGT) are more susceptible than healthy individuals to oxidative stress and cardiovascular disease. This randomised controlled investigation was designed to test the hypothesis that α-lipoic acid supplementation and exercise training may elicit favourable clinical changes in obese subjects with IGT. All data were collected from 24 obese (BMI ≥ 30 kg/m2) IGT patients. Following participant randomisation into two groups, fasting venous blood samples were obtained at baseline, and before and following intervention. The first group consisted of 12 participants who completed a 12 week control phase followed by 12 weeks of chronic exercise at 65% HRmax for 30 minutes a day, 5 days per week, while ingesting 1 gram per day of α-lipoic acid for 12 weeks. The second group consisted of 12 participants who completed the same 12 week control phase, but this was followed by 12 weeks of 1 gram per day of α-lipoic acid supplementation only (no exercise). The main findings show a comparatively greater rate of low density lipoprotein (LDL) oxidation in the group consisting of α-lipoic acid only (p < 0.05 vs. pre intervention), although total oxidant status was lower post intervention (p < 0.05 vs. baseline) in this group. However, exercise and α-lipoic acid in combination attenuates LDL oxidation. Furthermore, in the α-lipoic acid supplement plus exercise training group, total antioxidant capacity was significantly increased (p < 0.05 vs. baseline and pre intervention). Body fat percentage and waist and hip circumference decreased following exercise training (p < 0.05 vs. post intervention). There were no selective treatment differences for a range of other clinical outcomes including glycaemic regulation (p > 0.05). These findings report that α-lipoic acid ingestion may increase the atherogenicity of LDL when ingested in isolation of exercise, suggesting that in IGT the use of this antioxidant treatment does not ameliorate metabolic disturbances, but instead may detrimentally contribute to the pathogenesis of atherosclerosis and development of CVD. However, when α-lipoic acid is combined with exercise, this atherogenic effect is abolished” (8.) If that wasn’t enough Khabbazi et al examined the effects of alpha-lipoic acid (ALA) supplementation on inflammation, oxidative stress, and serum lipid profile levels in hemodialysis (HD) patients. This was a double-blinded, randomized, placebo-controlled clinical trial. The present study involved HD centers in Tabriz, Iran. Participants included 63 patients with end-stage renal disease (43 men and 20 women; age range: 22-79 years) undergoing maintenance HD. HD patients were randomly assigned into the supplemented group (n = 31), receiving a daily dose of ALA (600 mg), or a control group (n = 32), receiving placebo for 8 weeks. High sensitivity C-reactive protein (hsCRP), malondialdehyde, total antioxidant status, total cholesterol, triglyceride, high-density lipoprotein cholesterol (HDL-C), and low-density lipoprotein cholesterol (LDL-C) were measured at baseline and after 8 weeks of supplementation. At the end of intervention, 11 patients were excluded from the study. HsCRP levels decreased by 18.7% in the supplemented group after 8 weeks of supplementation, and the reduction was significant in comparison with the placebo group (P < .05); this finding was also significant after adjusting for baseline values of hsCRP. The mean malondialdehyde and total antioxidant status levels did not change significantly in the 2 groups during the study. The mean high-density lipoprotein cholesterol concentrations increased significantly in the supplemented group at the end of the study (P < .05); however, this improvement was not statistically significant as compared with the placebo group. No significant alterations were observed in the other lipid profile parameters within each group during the study. ALA supplementation significantly reduced hsCRP levels, which is a risk factor for cardiovascular disease in HD patients (9.)

This 3 part series is still just touching the basics on ALA and its isomers’ potential benefits as it also plays a role as a positive anti-oxidant, has potential blood pressure lowering properties, potential enhanced blood flow, reduced inflammation properties, and the list goes on and on. In terms of practical application for the purpose of glucose disposal, we are looking at a stand alone dosage of between 300-600mgs. Many believe that the various isomers (S- and R- isomers) may be better suited for glucose disposal but it seems there is very little difference. We can note that there are higher blood levels seen with the Na-R-ALA isomer version (10.) Overall, ALA has a tremendous amount of benefits that extend beyond simply management of glucose and should be considered as a potential ergogenic and health supplement that should be in everyone’s supplement stack. 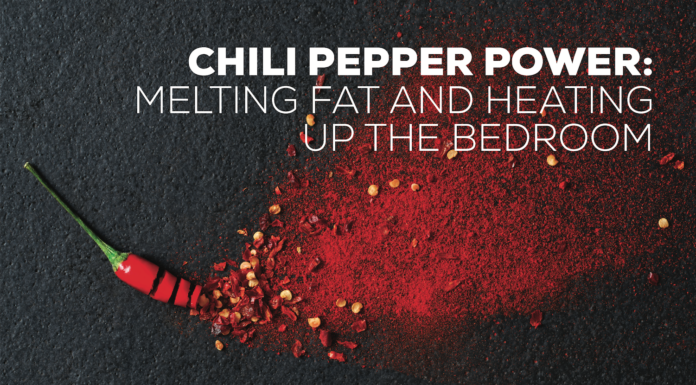 Chili Pepper Power: Melting Fat and Heating Up the Bedroom